Back in 2008, my wife and I took a trip to California to visit our son. He was on an internship there, which eventually lead to his moving there permanently. While we were there I came down with a nasty head cold. By the middle of the week I was miserable and didn’t want to do much, but I soldiered on as best I could.

At one point my wife said to me that she thought I really didn’t like being outside my comfort zone. At the time I was a Dale Carnegie instructor and coaxed people out of their comfort zones professionally. I took great exception to that comment, but it made me think. Surely the cold played a part in me closing ranks, but maybe there was more to it.

Since then I have really tried to be aware of my comfort zone, and tried to stretch it. This year I set as a goal to spend at least 4 hours per month dedicated to  photography. Yesterday I stepped out of my comfort zone and checked the January box.

When I woke up I saw that a friend of mine had been to a couple of the Lake Michigan lighthouses the day before. He was there photographing them as they were iced over. As I was preparing for work, I casually mentioned to my wife that I wished I could play hooky and go do that. At the time, around our house, it was clear and cold. She encouraged me to take an early vacation day and do it! So, after a few morning meetings, I did.

When I set out it was smooth sailing. Along the way I got a call from that friend who told me there was quite a nasty accident ahead. Upwards of 90 cars were involved and the highway was closed. I immediately sought an alternate route, and drove for miles on back roads. I rejoined the highway about an hour later thinking I’d gotten around the problem, only to discover that it was still ahead of me.

I stopped for lunch and installed WAZE on my phone. It guided me around the accident, but there was still a long way to go.

I traveled on for another couple of hours, sometimes in white out conditions. I saw dozens of cars in ditches, and others that were slipping and sliding, but I kept going. Eventually I got to the light. I had arrived at the South Haven Pier Light.

It was unbelievably cold. While the layers I had on kept my body warm, where my face was exposed was instantly painful, and my fingers, which had to be exposed to operate the camera, quickly became nearly useless. 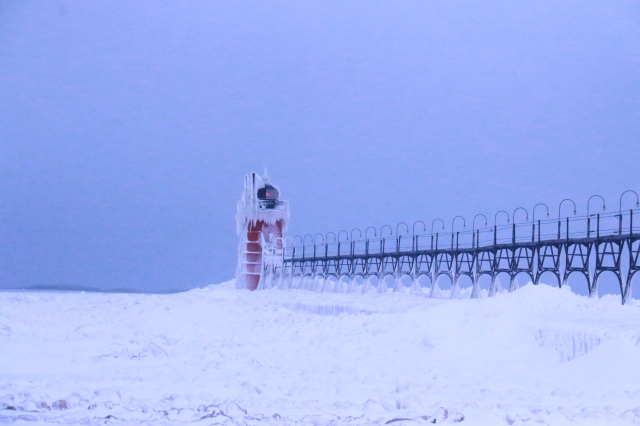 This is one of the pictures I took. The conditions for photos wasn’t great, and I didn’t have the wherewithal to play much with my camera settings. These photos aren’t going to win any awards, but they did accomplish the purpose for me.

I hate winter. And I hate being cold. Being out on the cold of winter is miles outside my comfort zone. But I have decided that I am not going to sit on my (smaller than last year) ass and let 1/4 of the year go by.

This year I plan to step beyond my boundaries more and do things that make me uncomfortable.

5 Responses to What comfort zone?