While my wife and I were visiting Michigan’s Upper Peninsula in August of 2013, she insisted that we have dinner at The Haywire Family Restaurant. She had discovered it on a previous trip with her parents, and raved about the food. 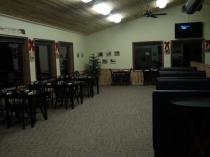 Photo used by permission from The Haywire’s facebook page

Located on Michigan State Route 94, in Manistique Michigan, this unassuming looking building packs power when it comes to down home, family cooking. The spacious interior is warm and inviting, but still smacks of a good old-fashioned, UP pole barn in design.

The restaurant is named for the stretch of the old Manistique and Lake Superior Railroad known as “The Haywire”. Service ended on this railroad in 1968, but the grade has been converted to a 37 mile snowmobile and ORV trail stretching from M-94 South of Shingleton to the Water Intake Plant in Manistique.

The day we visited we were served by none other than the owner, Nora. We enjoyed an early dinner that was made up entirely of freshly made dishes all from scratch. At the end of our dinners, I sampled the turtle pie that was quite delicious. (Nora told us it is the most popular of all the pies she bakes). My wife had a slice of chocolate cake that she said was better than all but her own. The food was reasonably priced, and plentiful in the portions.

Nora’s son, Patrick is the chef. Trained at the Culinary Art Institute of Virginia, he takes great pride in using only fresh, home made ingredients on his menu. Nora handles the baking between serving guests and running the front of house.

During our visit a large family came in. They were locals, and were greeted as old friends by the staff. The atmosphere was charming and warm, and the service was outstanding.

If you visit during the summer, you might ask for a seat near the back windows so you can watch the swarm of hummingbirds buzzing the feeders. Take a few minutes to read the cover of the menu to learn of the history of the Haywire Railroad, and its importance to the Manistique area. If you are camping in the area, and have forgotten something, there are even a few grocery items for sale at the cash register.

The address is: 8912 Boot Lake Road, Manistique Michigan, within the Hiawatha National Forest. It is a 17 mile drive from downtown Munising Michigan, and is a short drive from most locations in the central part of Pictured Rocks National Lakeshore. If you are visiting the Central UP, you must put this restaurant on your agenda!