Grand Marais is a somewhat sleepy little town on the shores of Lake Superior, in Michigan’s Upper Peninsula.  There are two light towers at Grand Marais, which work together to form the welcoming set of range lights that guide ships into West Bay. Once a booming port for the logging and lumber business, Grand Marais today is a resort town that features fishing opportunities for coho, steelhead and whitefish. 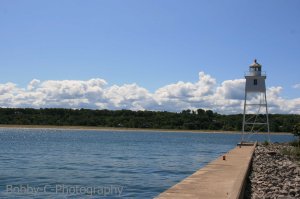 West Bay is a natural bay providing protection to the inner shore line. It is part of a larger area of the shore known as Harbor of Refuge, no doubt taking its name because of the many ships that sought it out as they plied their way along Lake Superior. In the 1880s, the US Army Corps of Engineers built two break walls to enhance the natural protection. It was after this that the range lights were built to help guide ships in.

We visited the lights in August of 2013. A day or two before we visited, there had been thunderstorms in the area. Although our day was crisp and beautiful, the remnants of the storms in the form of breaking waves in Lake Superior were still present.  The stark difference between the rough waters of Lake Superior, and the inviting calm of the protected bay served as a reminder of the importance these lights played in helping ships to survive the volatile lake.

The keeper’s quarters have been converted to a museum which is open daily from 1:00pm to 4:00pm in July and August. In June and September it is open only on weekends from 1:00pm until 4:00pm

To get to the Grand Marais lights:

From the South: take Michigan State Route 77 North into Grand Marais. Bear right onto Canal Street and follow it out to the light station.

From the East or West: take H58 into Grand Marais, and turn North onto Lake Street. You will go a short distance and then bear right (North East), onto Canal Street which will take you to the light.

For more information you can visit the Grand Marais Chamber of Commerce website.