Au Sable Point Lighthouse is located in Michigan’s Upper Peninsula, in the area known as The Pictured Rocks National Lakeshore. And, Au Sable Point is the Lighthouse that sparked my interest in finding and photographing Lighthouses.

It all started in the summer of the year 2000. That summer my wife and I decided to take our children on a week-long vacation to Michigan’s UP. None of us had ever been North of the Mackinac Bridge, so it was truly an adventure.

Our trip spanned over the 4th of July Holiday that year. I remember well that the temperatures in the UP never got much above 70 degrees all week, and we had several days of hard rain. We rented a cabin along Lake Manistique, and my wife planned several day trips to the area around the Eastern half of the UP.

My wife wanted to visit Lighthouses. She had previously been to the two lights at Presque Isle in the Alpena, Michigan area and had enjoyed the charm of the lights. I thought she was a little batty with the idea, and I grudgingly came along.

Au Sable Point in my 2000 photograph

Au Sable Point was not the first light we visited on that vacation. We had spent a gorgeous day at Seul Choix, and a rainy one at Whitefish Point. I had actually gone to Whitefish Point with some enthusiasm because I was interested in the Great Lakes Shipwreck museum.

On the day we went to Au Sable Point, we hadn’t left with the lighthouse in mind. We had been to Miners Castle, and from there went to Log Slide. While at Log Slide we saw the light in the binoculars and decided to make the trip. The hike from Log Slide to Au Sable Point is about 1.5 miles, all down hill. When we arrived, I took some pictures, only about 4.

When we got back from the vacation and our pictures were developed, I was amazed by the picture of Au Sable point. It was an amazing day, and the blue sky was perfect behind the light. It was that picture that sparked my interest in finding and visiting lighthouses. 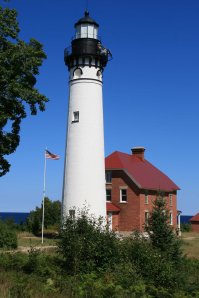 My photo of Au Sable Poit in August 2013

This summer my wife and I returned to Au Sable Point. This time we hiked from Hurricane River, which  is also about 1.5 miles but on flat land. When we arrived, I was immediately struck with a nostalgic sense of déjà vu. After 13 years, and over 160 visits to other lights across the US, I was back where it began.

Once again we were visiting on a day that was perfect for photography. The skies were a deep blue, and the air was fresh and crisp. This time I took far more pictures, but I wanted to make sure I came as close as I could to re-capturing that original photo.

It’s hard for me to describe the feelings I get visiting lights. There is a sense of adventure to be sure. Since my childhood I have enjoyed visiting places of historical significance. Many were the Sundays that I spent in the backseat of my God Parents’ car heading to sites all across my home state of Ohio. Those Sunday rides gave me an appreciation of the significance of the history of the area, and how that history had an influence on how things are today.

There are hundreds, if not thousands of light houses in the world. Surely I will never be able to visit them all, but in the meantime, each time I reach a new light, that feeling comes back to me. The sense of wonder, the sense of standing on historically significant ground, and the sense that where we are today is directly influenced by the roles these silent sentinels played in the forming of our Region’s and our Nation’s history.